Those who frequent Twitter and Facebook have likely noticed trending hashtags designed to bring visibility to women and minorities excelling in traditionally male-dominated fields. The #ilooklikeasurgeon campaign is one great example—and Dr. Kirby is honored to have taken part.

This past spring, an animated New Yorker cover inspired Dr. Susan Pitt, an endocrine surgeon, to call on her female colleagues to recreate the cover with their own faces. Here Dr. Kirby and fellow female colleagues take on the dramatic image; can you guess which one is her? 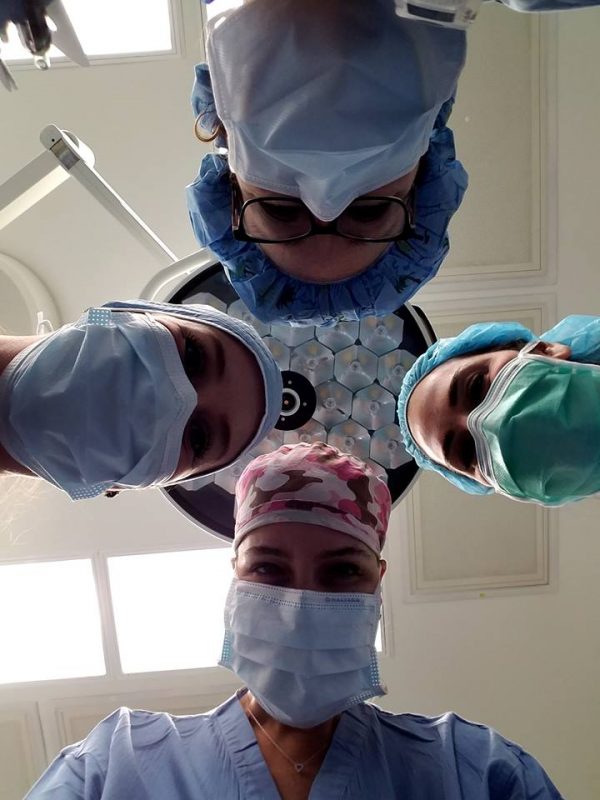 The #ilooklikeasurgeon campaign is not just about publishing positive images—participants hope to inspire others to push past perceived limitations and fully realize their talents. We recently sat down with Dr. Kirby to discuss her involvement and what being a female surgeon means to her.

What makes #ilooklikeasurgeon such a great campaign? Why does it resonate with you?

“#ilooklikeasurgeon mobilizes female role models across the globe to show young men and women what surgeons really look like, shattering stereotypes and promoting diversity in medicine.

“When Heather Logghe (@LoggheMD) first blogged with the #ilooklikeasurgeon hashtag, she said, ‘Be the role model you always wanted but never had.’ That hit struck a chord on an international scale, with global social media posts continuing to trend.

“We post photos from home, with our children, running in the park, wearing fashionable sunglasses, in formalwear, and operating. It shatters the classic image of the aged male surgeon and replaces it with smart, beautiful, capable, hard-working women.

“For me personally, it’s important that I serve not only as a role model for young girls who are interested in medicine, but also for my two young sons. I want to show them that women can be strong, intelligent, successful and relatable at the same time.

“It’s amazing how early societal perceptions are ingrained in our children. One day as my boys and I were opening a difficult package, they both stopped and said, “Mommy, we need a knife! I’ll go get daddy!” Little did they know that mommy wields a sharper knife than daddy (on most days). It is important to me that my sons don’t grow up assuming people’s roles in life or counting someone out before they get a chance to show their talents.”

Adversity builds success, strength and character. As with other paths in life, you can make many choices when faced with adversity. Quitting was never one of them for me.

“There is an old riddle where a father and a son are in a car accident.  Tragically, the father dies instantly and the son is taken to the nearest hospital.  The doctor comes in and exclaims, ‘I can’t operate on this boy.’

‘Because he’s my son,‘ the doctor responds.

How is this possible?

The riddle is that most don’t immediately realize that the mother is the surgeon.  Hopefully, riddles such as this won’t be around much longer; mommy can snuggle her kids, cuddle them, read them books and turn around to reconstruct an infant’s cranium, all on the same day.”

What does being a female surgeon mean to you?

“I love educating patients about their own bodies and helping them improve something about themselves, whether it is reconstructing a breast ravaged by cancer or tightening up a mommy’s tummy after pregnancy. It’s all about how we feel in our own skin.

“I have wanted to be a surgeon since the second grade, when a friend’s father, a plastic surgeon, talked to our class about what he does with cleft lips. I was already interested in being an artist, a doctor or a formula one racecar driver. Twenty-nine years later I finished my training and opened my own practice, utilizing art and medicine. If you use your gifts, with grit, determination and a whole lot of dedication, you can persevere.”

Even after my college pre-med advisor suggested I might be happier “getting married and having babies” instead of pursuing a medical career, I have not entered situations in medicine expecting any different treatment as a woman.

Were there any difficulties you had to overcome on your journey to becoming a plastic surgeon? Only a very small percentage of ASAPS surgeons are female.

“Every physician faces difficulties in their journey into the medical field; we could all tell ‘war stories’ from our days in residency. Training in residency is not your job, it’s your life. Physicians, especially surgeons, give up any semblance of a ‘normal’ life to pursue training, often working 80+ hour weeks for as many as six or more years (after medical school). It takes a true calling, love of the specialty and a rare tenacity to complete training in plastic surgery. It helps to have supportive family and friends who understand when you disappear from everyday life for a while.

“Adversity builds success, strength and character. As with other paths in life, you can make many choices when faced with adversity. Quitting was never one of them for me. You learn a lot about yourself in these situations; you learn what your limits are and how far you can push them to succeed.

A wise female surgeon once told me that you can’t be 100% mom, 100% surgeon, 100% friend, 100% sister, 100% daughter…the numbers just don’t add up. There has to be give and take, based on priorities and circumstances. A family that understands and supports these ups and downs is advantageous.

“Even after my college pre-med advisor suggested I might be happier ‘getting married and having babies’ instead of pursuing a medical career, I have not entered situations in medicine expecting any different treatment as a woman. And he was right–I have also enjoyed getting married and having babies! As long as I can remember, I have always known there was no question I would pursue anything other than medicine. My plan was always to put my nose down and try to work harder than anyone else and perform better than everyone else. I continue to strive for perfection in my work because I have passion for what I do. As Henry Ford once said, ‘whether you think you can or your can’t–you’re right'”

What are some of the unique challenges of being a mother, business owner, and surgeon?

“Starting our family during training was not easy. Choosing the right partner is key. My husband had his own full-time career, so it would have been nice to be closer to our families, but that wasn’t an option. Medical students don’t have much choice in where they will end up when a surgical residency opportunity arises. Still, we did it. We survived—and then we had our second child during fellowship.

“There are compromises that have to be made. I may have only had 11 days to rest after delivering my second child, but I’m present at every school program and recital at school. I haven’t missed a single doctor’s appointment, and I attend every baseball game (even if I sometimes miss the first pitch). Still, there are times I return home late or get called away for an emergency for a trauma.

“A female surgeon once told me that you can’t be 100% mom, 100% surgeon, 100% friend, 100% sister, 100% daughter…the numbers just don’t add up. There has to be give and take, based on priorities and circumstances. A family that understands and supports these ups and downs is key.

“Graduating from residency and then fellowship gives a surgeon an enormous sense of accomplishment and pride. When I refer to residency, I often say ‘When we were in residency….’ People try to correct me, but it was most definitely ‘we’ who conquered my surgical training.”

“Women who paved the medical path ahead of me are immensely inspiring. Elizabeth Blackwell was denied entry to medical school since, as a woman, she was presumed to be ‘intellectually inferior.’ She became the first woman to receive a medical degree in the United States in 1849.

“I respect male surgeons who are not intimidated or threatened by female surgeons sharing the operating room. A mentor of mine once told me, ‘You don’t have to be a large man to be a good [orthopedic] surgeon, but a smart surgeon who uses instruments wisely.'”

“My husband and family inspire me daily to be the best mother, wife, sister, daughter and surgeon that I can be. My mother and grandmother have been strong female role models for me as well. Although not in the medical field, they pursued advanced degrees and valued education, independence and family.”

More in In The Media